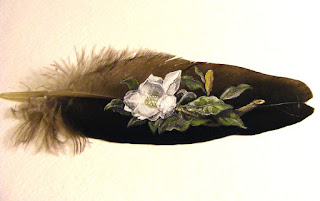 I grew up in Ohio and have since lived in Michigan, New Hampshire, Connecticut, North Carolina, and now Mississippi for the last eight years. I am at a crossroads in my life that affords me the freedom to move anywhere I choose. This past year I went through a divorce, sold the house, and resigned from my university teaching position. I have no children and thus have only the ties I create to hold me to any particular place. I’ve got and clean slate and the world flung wide open--a rare opportunity for a 36-year-old.  After many months of considering different parts of the country, I’m going to be moving to Jackson in June. I’m choosing to stay in Mississippi and I feel great about it.

This is not a statement I would have made for the first seven and a half years I was living in this state. I missed New England the most. I wished for the possibility of moving to Canada or Europe or just plain North.  For the past six months, Jackson has been my back-up Plan B in case nothing else worked out. Nothing else has worked out. The Mississippi Symphony (based in Jackson) is very dear to me (I play bassoon and contrabassoon with them…not enough pay to live on, but performing is something I need to do. They want me and I want them. It’s a good relationship.). The Mississippi Arts Commission is also based in Jackson. They are a quality agency making a difference in the state.  I intend to make myself useful. It will also be good to live in a city again. It always feels right to me to drive through town on I-55 when I’m there: lots of traffic moving fast. I’ve missed that. I’ll also be close enough to my ex-husband for a day-trip or weekend visit or to be available in case of an emergency. There’s no chance we’ll ever remarry and I am reminded of some of the reasons the divorce was a good idea when we spend more than an hour together (some of the remaining reasons having been my fault, and other reasons having now gone away--we communicate many things better now than we ever did. We've both learned a lot this year.). Yet, he is my dearest friend. It will be good to have him close for a little while longer (until he runs off to Canada or New England or just plain North).

And so I have to admit that I’ve grown fond of Mississippi.  My favorite thing about living in here is the starry sky. This place has less light pollution than anywhere else I’ve ever lived (anywhere most people live). Even in town, with street lights close, I can see more stars here on clear nights than I ever did growing up. If I sneak out to the Noxubee Refuge in the dead of night the sky explodes.  It takes my breath away.


Update 2013: I am so pleased to share that on April 21, 2013 I married Ty Maisel, an eighth-generation Mississippian who plays violin in the Mississippi Symphony--a wonderful man with a large, wonderful extended family here in Jackson. I am making myself useful with the Mississippi Arts Commission. I'm working as a consultant for them, coordinating the Carnegie Hall LinkUp children's concerts across the state. In the whirlwind of change that has happened in the last year I also lost my father. He died on October 13, 2012 at home with mom. It was sudden and unexpected. Damen is doing well, though we rarely keep in touch now that we have both moved on to new happy relationships, as it should be.
Posted by Elaine Maisel at 11:11 PM

Elaine Maisel
I lead a double career as a musician and a painter. I play bassoon and contrabassoon with the Mississippi Symphony and I am the Carnegie Hall Link Up Coordinator for the Mississippi Arts Commission. Bassoondoctor.blogspot.com is where I share my experience and knowledge as a professional musician and music educator. Elainemaisel.blogspot.com is devoted to my craft as a feather painter. I am a member of the Mississippi Craftsmen Guild with my painted feathers. My website is https://elainemaisel.com. my Etsy store is https://www.etsy.com/shop/ElaineMaisel